A place to share projects from my sewing room.

Practicing on My Babylock Tiara

When I first brought my new Babylock Tiara home in early December, it was noisy.  After a moment or so of stitching, it would start to make a clackety, clunkety noise. If I adjusted the tensions, it would sound better, but the stitches looked terrible.  I would continue adjusting tension until the stitches looked good and the noise would start again.  After going back and talking to my dealer  a couple of times, and playing on the demo machine there to see how it sounds, we decided that I should bring it in.   After dropping it off Tuesday, it was ready for me to pick on on Thursday.  The take up link assembly was re-set.  Thanks George, for getting to it so quickly! 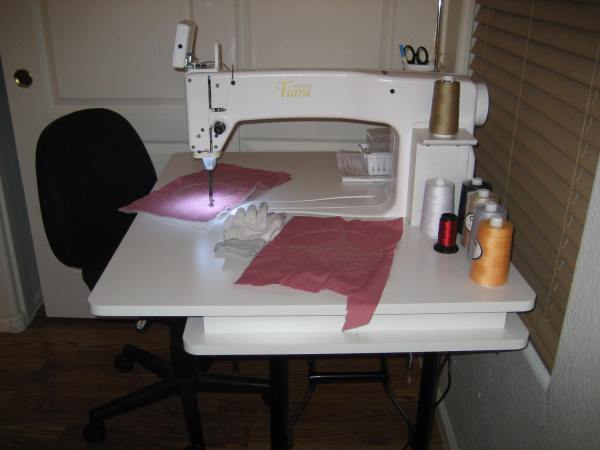 I did manage to do several practice sandwiches before taking it in, but my focus was on the tensions rather than on making any type of design.

Yesterday, I just had to sit down and play for a while.

Now that I have it back home, it sounds so much better and the stitches are much nicer and more evenly balanced.

For this practice piece, I used 3 different sizes of the circle templates and decided to fill them in with the feathers that I had practiced.  Oops!  The feathers on the left side of the center circle are going the wrong way!  I meant for them to go up each side and meet in the middle.   -Lesson learned!

I should have place the bottom of the design along one of the edges instead of toward the corner.  -Lesson learned!

Can you see the pinkish lines marking the center?  That was marked with an iron off chalk marking pencil.  What you are seeing is the ghost line after ironing.  I am glad that I learned this on a practice piece instead of a real quilt.  -Lesson learned!

Practice pieces are a great way to learn.

This is the practice piece I did today.

I used basically the same set up as the previous photo, but with better planning this time.

The round, center area was stitched with Aurifil 50wt. cotton and 60 wt poly in the bobbin.  This time, the feathers are all going in the desired direction.  Echo quilting was done 3 times around the center feathers and then filled in with pebbles.

The much less attractive “swirls” stitching was done with a much heavier thread.  I used 12wt cotton on top and stayed with the 60wt bobbin thread.  The bobbin thread was being pulled to the top so I loosened the top tension, a lot.  I could still see some bobbin thread poking through, plus the top thread was poking through to the underside and my machine did not sound happy.  I probably should have tightened the bobbin, but I decided to just hold off on heavier threads for now.

I am happy with how much I am learning and how each time I practice, my stitching looks just a little bit better.

I hope that by the time Easy Street is finished that I will be ready to quilt it on my Tiara!

My name is June, I am a Dental Hygienist and Mom to 2 grown sons, a dog and 2 cats. I recently married my best friend and life is good. I love any and all kinds of crafts. I dabble in several hobbies and consider myself an expert in none ~ I just enjoy them. I hope to make this blog a diary of my projects as I complete them. I get a lot of inspiration reading blogs of those who are more crafty & artistic than I am and I hope others will find at least a little bit of inspiration here.

Please see my About Me page to see why I appear to be a No Reply blogger when I comment on your blog posts.

FYI: If you sign up for any Craftsy classes, purchased or free, using the links on this blog, I may receive a portion of the proceeds. Of course, I will most likely use these proceeds to purchase additional Craftsy classes, so thank your for supporting my crafty education.